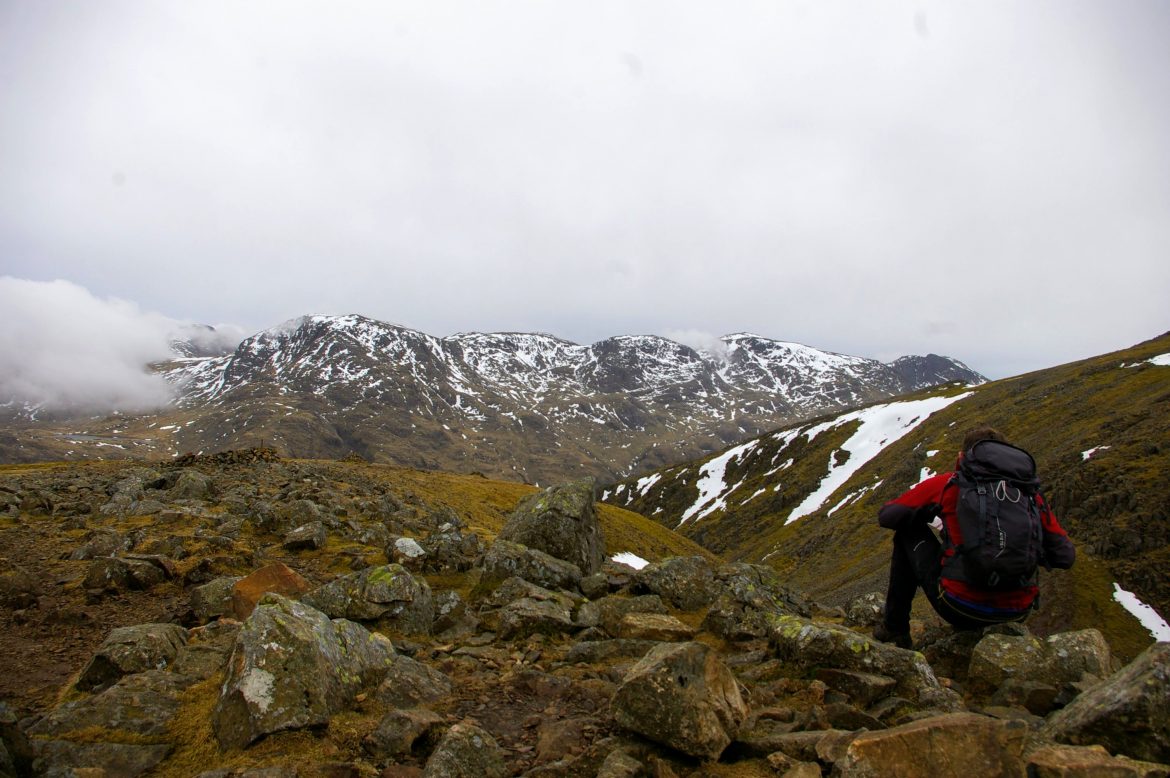 With the first successful week of the new bed & breakfast season behind us, we decided to celebrate the only way we know how: by heading to the hills! We were planning to do a big day in the Lake District but didn’t quite realise how big it was going to be until we’re up there climbing hills.

We are used to getting up early so that we can offer 7 am breakfast option to our guests throughout the week. We like to get out early when heading to the hills so that we can make the most of the day and want to offer our guests the same possibility. So at 7 am on Saturday morning we set off from Shap and at 8.05 am we started our walk in Seathwaite in Borrowdale. We had chosen a route from Mark Richards’ book Great Mountain Days in the Lake District and set off up the track by Sourmilk Gill. It was a great climb to quickly gain height and to warm ourselves up. Once we were up, we verged off the recommended route to bag Base Brown (646 m) as the first hill of the day. 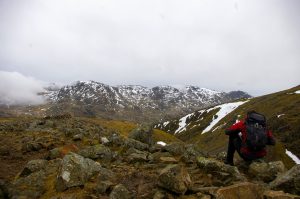 Next up was Green Gable (801 m), then a steep decent and a rocky ascent up its big brother Great Gable (899 m). Somewhere between those two magnificent hills a new plan hatched. As we had made great progress (bagging three hills in 2 hours) and had the most of the day still ahead of us, we decided to take a few more big hills while we were in this part of the world. The reason why all of us here at New Ing Lodge live on the edge of the Lake District, is so that we can play in the hills. So we might as well go big before we go home! 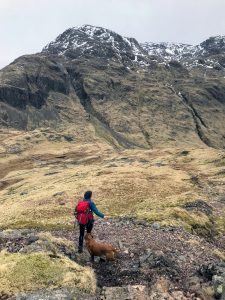 We were warned by a fellow walker at the top of Great Gable that the weather was coming in and it was supposed to start raining in a few hours. This wasn’t quite what we had read from MWIS forecast on Friday. Nevertheless, we decided to go ahead and get up the Corridor Route to tick off the best known, and the highest hill in the Lake District: Scafell Pike (977 m). The Corridor Route, which heads up from Styhead Pass, is a beautiful and very accessible route to get up to the Scafell range. There are a few hands-on bits on the way, but there’s nothing that a seasoned walker couldn’t do. This Saturday it also felt like we had the hills to ourselves – we only saw two other people during our ascent. The view along this route are more than stunning!

As we were heading upwards, we had to admit that our forecast had been wrong and the rain started to fall down persistently. It was time to change into our waterproofs. Investing in good gear is essential in order to enjoy your days out fully and when hiking in the Lakes, you should always make room for waterproofs in your backpack.  The incoming rain didn’t put a damper on our excitement of having a big day in the hills and we trudged onward and upwards. The route offers a wonderful view towards Lingmell (807 m), which looked very tempting, so it would have been very silly of us not to take that one as well, seeing as we were in the neighbourhood.

The path up to Scafell Pike was quite a highway with plenty of people and dogs going up and down it. It is definitely one of the best know peaks in the Lake District and many visitors to the area will want to tick off England’s highest mountain as part of their holidays. The ascent to the top of the highest peak was where characters were tested during our day. Some of us (namely our Labradors, Tia and Mac) were in excellent form and went up with a spring in their steps. Scott didn’t do so bad either. Some others (not to point fingers or name names… but Eeva) had a bit of struggle to get to the top of Scafell Pike. However, we’re pleased to say, everyone made it up in their own time and most importantly in good spirits. 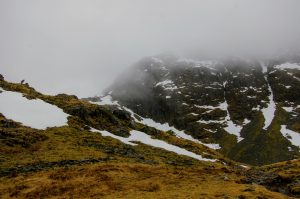 The weather conditions at that point were quite typical for the Lakes: rain and poor visibility. We wouldn’t have had it any other way! It was all downhill after Scafell Pike, or at least mostly downhill. On our way, we quickly bagged Broad Crag (934 m) and Ill Crag (935 m) and decided that Great End (910 m) would indeed be a great end to our day of collecting peaks. By that time, the clouds had really sunk down but with a help from a trusted compass and a map, we descended down to Esk Hause and then took an absolutely stunning route by Grains Gill back down to Seathwaite. 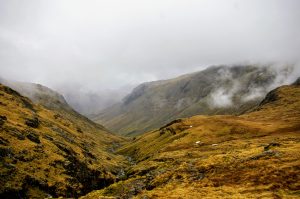 By the time we reached the car again we were soaked and tired but really happy. What a fantastic day in the hills! We had all together walked 20.4 kilometres, ascended 1520 metres and touched the summit cairns of 8 wonderful Lakeland fells. This is what we call a great day out in the Lake District! Our legs might have been tired but our minds were truly invigorated. This “little” outing had given us a plenty of energy and loads of ideas to put in use as our season rolls on!

While there are plenty of beautiful and exciting walks from our door or close by, it is good to sometimes venture a bit further afield and test out new playgrounds. Here at New Ing Lodge, we all love the outdoors and we’re always ready to give suggestions to our guests for great walks near by or a bit further in the area. Why not treat yourself to a refreshing few days in the hills and come stay with us to compare notes! You can check our availability for the coming weeks and months quickly just HERE.

Our route on map:

Lessons to be learned
Is it summer yet?